Twice a King, In One Day

Earl of Carrick, Robert Bruce was born at Turnberry Castle, Ayrshire, on July 11, 1274. He was born into an aristocratic Scottish family with both Norman and Celtic ancestry. His grandfather had been one of the claimants to the Scottish throne during the dispute of succession from 1290-92. During that time, Edward I of England had been asked to settle the dispute; he chose the weaker, more likely to do Edward’s bidding, John Balliol to be the king. Neither Bruce nor his father would stand behind Balliol, and were both supporters of the campaign of Edward I when he invaded Scotland in 1296, forcing the abdication of Balliol. Afterward, Scotland was ruled by Edward I as a province of England.

Bruce supported the uprising led by William Wallace against the English, but even after Wallace had been defeated, the Bruce lands were not confiscated. In fact, in 1298, it was Bruce who was named as guardian of Scotland along with Balliol’s nephew, John Comyn. The two men were rivals and quarreled often. In 1306 they had a great quarrel while meeting in Greyfriar’s Kirk at Dumfires, during which, Bruce stabbed Comyn and killed him. Bruce was excommunicated by the pope and outlawed by Edward I. This did not deter him from proclaiming himself King of Scotland.

Historically, Scottish Kings were crowned while sitting upon the Stone of Destiny at the mound at Scone, but since Edward I had stolen the stone in 1296 at taken it back to London, Bruce was not able to sit upon it for his coronation. The coronation ceremony should have been conducted by the Earl of Fife, but the Earl was in prison. The Earl’s daughter, Isabella, rode to Scone to represent her father, but Bruce had already been crowned by the time she arrived. The ceremony was repeated in her presence to assure that the representation of the Earl of Fife was recorded. Later, it was judged that both of the ceremonies had been legal ones, and so Robert the Bruce was crowned the Scottish king, twice in one day, March 27, 1306.

The next year, Bruce was deposed by Edward I’s army at the battle of Methven and he fled to an island off the coast of Northern Ireland. His wife and his daughters were thrown in to prison and three of his brothers were executed in his absence. It was while he was hiding on the island that the legend of Robert Bruce and the spider was born. Alone and seemingly defeated, he was ready to give up, but he noticed a spider weaving a web in the cave where he was living. He saw how the spider struggled to catch places in the rocks to put its web, and how it kept trying over and over. As the spider was finally successful, Bruce found the inspiration to return to continue his fight for a free Scotland.

He returned to Scotland a year later, and with Sir James Douglas, “the Black Douglas” at his side, he fought his first victorious battle of the new campaign on Palm Sunday, 1307. The Clans from all over Scotland came to Bruce’s aide, and their combined strength won many battles against the English. By 1314, he was fighting against a much larger army led by the newly-crowned Edward II of England. Bruce won a decisive battle at Bannockburn in June of 1314, and the independent Scottish monarchy was re-established.

The Scottish army captured Berwick in 1318, and still Edward II refused to relinquish his claim to the Scotland. In 1320, the Scottish “community of the realm” sent a letter to Pope John XXII in which they asserted the “antiquity of the Scottish people and their monarchy” declared that Robert the Bruce was their rightful king. 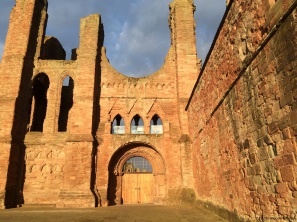 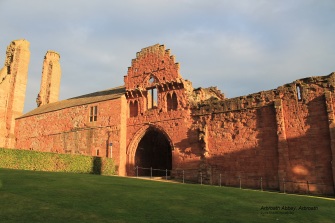 Four years later, the Pope gave formal recognition of Robert the Bruce as king of an independent Scotland. The English deposed Edward II in 1327; his son was placed upon the throne and formalized peace with Scotland, renouncing all English claims over the country.

Robert the Bruce died on June 7, 1329. He was buried a Dunfermline, but as per his request, his heart was to be taken to the Holy Land. His heart never made it as far as the Holy Land, and was returned to Scotland from Spain and buried in Melrose Abbey.
Scotland remained independent until King James VI of Scotland also became King James I of England and Ireland, and formed the union of the Scottish and English crowns on March 24, 1603.

Kate writes two blogs currently: "Weaving the Magic Thread ~ the texture of my life", a collection of auto-biographical essays; and "Scottish Heart", where she shares her love of Scotland and the trips through Scotland that she both plans and guides. She is also Copy Editor and Lead Contributor Emerita for "Celtic Family Magazine". Kate retired in 2013 from nearly 40 years in Private Practice as a Somatic Psychotherapist & Bodyworker, Massage Therapy Instructor, Sivananda Yoga Teacher, Spa Director, and Consultant, who also wrote & taught about Eco-sustainability and WellBalance. Her professional blog, "The Riley School of Integrated Somatic Bodywork" is also retired. All of Kate's blogs are copyright by Kate Cowie Riley; all photos are copyright Kate Cowie Riley, unless otherwise stated. All photos and text or part thereof are not to be used for commercial purposes or without written permission from the author. All photos must be used in their original form, no addition or alteration are allowed. Any advertisements that are seen on the Wordpress sites are in no way supported by Kate Riley.
View all posts by Kate Cowie Riley →
This entry was posted in Ancestry, Arbroath Abbey, Eco-travel, Ecology, Robert the Bruce, Scotland, Scottish ancestry, Self drive Scotland tours, Travel, Uncategorized, Women Writers. Bookmark the permalink.

2 Responses to Twice a King, In One Day