Orkney is a special place filled with ancient sites and the peacefulness that island life creates. Orkney gets its name from the Old Norse name Orkneyjar (Orc-nee-yahr), “Seal Islands”. When they arrived in the ninth century, the Norsemen heard the Pictish word for the place, Orc (“wild boar or wild pig”, possibly referring to a tribal totem animal), as orkn (Old Norse, “seal”) and then added the suffix eyjar for“islands”. The Norse Orkneyjar became shortened to Orkney over time. With its history dating back as far as the Mesolithic and continuing on through to the era of the Picts and then the Dalriadic Gaels, to Norse rule and then to Scottish, the archipelago of Orkney holds thousands of treasured sites and its history weaves through its modern day culture.

In the beginning stages of planning this trip, I sorted through the memorabilia from my three previous trips to Scotland. In the assorted papers, pamphlets, and notes I came across the retail tag from a hand-knit hat that I had purchased in Kirkwall in 2006. It’s been one of my favorite hats over the years, special to me not only because of its intricate design but also because of where I got it. I’d worn the hat as I continued to travel around Scotland, and several times people remarked that it was obvious I had been to Orkney because the design on the hat is specific to the island. I have always referred to it as my “Orkney Hat”. Since the friend that I was traveling with this time is a knitter, spinner, felter, and lover of all things woolen, I thought that it was fortuitous that the name of the person who made my hat was on the retail tag. “What if,” I thought, “I could somehow arrange for Marsha to meet with the woman who knit this hat? Or, at least perhaps find out about good places to buy wool on Orkney?” (A note here, it’s “yarn” in the US, “wool” in Scotland.)

I was able to find Lana online and what followed was a wonderful back-and-forth discussion over the next few weeks in which she gave me good advice about the Pentland Ferry, talked about wool crafts people that we could find on Orkney, and the best thing of all: an invitation to spend the evening at her house enjoying conversation and storytelling with some of her friends.

After arriving in Orkney and having our tea, we drove onto the Mainland (Old Norse: Meginland, “the largest island”). Our first priority was getting to our 1:00 PM appointment to tour Maeshowe (also sometimes spelled Maes Howe; I have written about it here). We were just early enough that we had time to stroll out to the site and enjoy the view for a bit. There is no way to adequately describe the winds on Orkney. I forewarned Marsha, but the full realization of it showed on her face as she stood out in the middle of the moor with the winds and the not-quite-ready-to-rain clouds overhead.

The Old Norse for Maeshowe was Orkahaugr, ”mound of the Orcs” or perhaps “mound of power”. The inner chamber is softly lit, showing the depth of shadow off the drystone construction that dates from 2700 BCE. The huge slabs of stone are impeccably placed to create the chamber. Scratched into the stones are various lines of runic writing; nearly thirty separate inscriptions make up one of the largest collections of runic writing in the world. Written in the 12th century, the runes are a comparatively modern addition to the site. The full meaning of the chambered cairn at Maeshowe is not clear, although there is evidence that it was build over another site, most probably a stone circle. What is known is that the sunset of the Winter Solstice shines down the entrance passage and directly on to the back wall. Just to stand in there with the realization of all those (pre-tourist era) people who stood there over thousands of years, for whatever reason, is an honor.

Our tour completed, we drove off to the northwest part of the Mainland, staying on the A966 as it follows the coast up to Tingwall (Old Norse: Þingvöllr, “field of the parliament”) and then past the Loch of Swannay and over to Birsay (Old Norse: Birgisherað, “the fortress district”). The village takes its name from the island Brough of Birsay which is joined to the Mainland during low tides. In the 7th and 8th centuries, the area was a Pictish stronghold; by the 9th century the Norse had taken over, and it was the seat of the rulers of Orkney up until the 12th century when Kirkwall became more prominent.

Our destination was located on a small hill overlooking Birsay Bay. I had found a few possible places for lunch, and I am glad that we decided upon the Birsay Bay Tea Room. The people there were cheerful and the food was delicious. I had the farmhouse cheese quiche & sweet potato rosemary soup which was excellent; and Marsha had the soup and a turkey sandwich with Orkney chutney and Redbush & Vanilla tea to drink. We sat looking out over the Bay to the Brough of Birsay with soft waves of fog drifting overhead. It would have been a great place to hang out for a while longer, but we had places to see before we went to Lana’s house for the evening.

The first one on the way was the ruins of the late 16th century castle that was built by Robert Stewart (1533-93), half-brother to Mary Queen of Scots. He was created Earl of Orkney, Lord of Shetland and Knight of Birsay in 1581 by James VI (Mary’s son). He built the castle as his primary residence on Orkney. It was not used as a primary residence by his heir, and by the late 17th century it began to collapse. The castle is located just down the road from the tea house on the northern edge of the village of Birsay.

On our way back in to Kirkwall (pronounced “Kirkwaa”, from Kirkjuvagr ,pronounced “Kirkvoe”, “the church bay”) we were met on a single lane road by twenty or so head of cattle being herding down the road by an SUV and a man on a bicycle. All I could think of to do was stop the car. I thought that if I kept the car still, they would just pass by and none of them would get startled and possibly hurt. Just to the right of where I stopped was a driveway, but there was a chain across it so it wasn’t going to be any help to me. And then, a man came out of the house, un-hooked the chain and motioned me to quickly drive in to his driveway. I rolled down my window to thank him and here again came the recognition of a foreign accent followed by a pleasant conversation. He was so welcoming and kind, he almost had us in for tea. With the immediacy of the situation gone after cattle passed by, we thanked him once again and set off down the road. 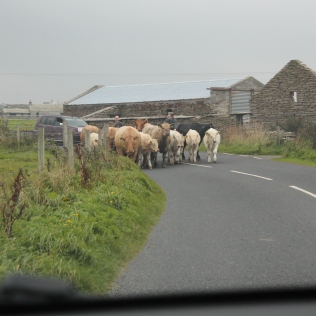 Since we wanted to be able to spend a lot of time at the Ring of Brodgar and the Stones of Stennes, and we had decided to go into Kirkwall and find a shop to buy fresh clothes to wear to Lana’s, we drove straight to our accommodations for the evening, The Ardconnel B&B just outside of Kirkwall. Margaret was very helpful and once we got settled, she directed us to M&Co where we were able to find new jeans and tops. The sales ladies were very patient with us as we ended up keeping them a few minutes past closing. As we apologized, we explained our predicament with the luggage, and they were very understanding and helpful. A fast trip back to the B&B for showers, and then, just as the sun was setting, we were on our way to our evening of storytelling.

Kate writes two blogs currently: "Weaving the Magic Thread ~ the texture of my life", a collection of auto-biographical essays; and "Scottish Heart", where she shares her love of Scotland and the trips through Scotland that she both plans and guides. She is also Copy Editor and Lead Contributor Emerita for "Celtic Family Magazine". Kate retired in 2013 from nearly 40 years in Private Practice as a Somatic Psychotherapist & Bodyworker, Massage Therapy Instructor, Sivananda Yoga Teacher, Spa Director, and Consultant, who also wrote & taught about Eco-sustainability and WellBalance. Her professional blog, "The Riley School of Integrated Somatic Bodywork" is also retired. All of Kate's blogs are copyright by Kate Cowie Riley; all photos are copyright Kate Cowie Riley, unless otherwise stated. All photos and text or part thereof are not to be used for commercial purposes or without written permission from the author. All photos must be used in their original form, no addition or alteration are allowed. Any advertisements that are seen on the Wordpress sites are in no way supported by Kate Riley.
View all posts by Kate Cowie Riley →
This entry was posted in Eco-travel, Maes Howe, Orkney, Orkneyinga Saga, Scotland, Scottish ancestry, Self drive Scotland tours, Travel, Uncategorized, Winter Solstice, Women Writers. Bookmark the permalink.