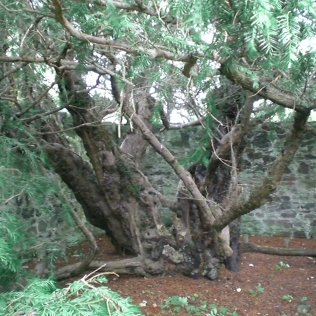 We left Killan and continued along the A827, basically following the northern shore of Loch Tay. We stopped at a crofter shop on the side of the road where a man sold his carvings from elk and cow horns.  He did some incredibly beautiful and intricate work.  A couple of purchases later, we were on the road again.

We kept heading east until we found the little unnamed road that leads to the village of Fortingall, Feart-nan-Gall, the ‘Stronghold of the Strangers’, just at the entrance to Glen Lyon. We wanted to see the yew tree growing there which is estimated to be at least 3,000 years old (possibly as old as 5,000 years) and is the oldest living organism in Britain.

Ancient lore from many cultures regards the yew as the “tree of eternity” and as a tree of knowledge. In The Book of Druidry (1990), Ross Nichols writes:

“the yew stood for sacred mystery in the Druid tradition; yews were planted systematically about the places, often wells, that held sacred truths, perhaps to awe votaries as much as because the trees themselves held sacred properties….In Druid tree language it stood for the Ovate grade, one who specialized in learning concerning the mysteries. In both the Druidic tradition of reincarnation, and the later Christian doctrine of the resurrection, the yew was viewed as a natural emblem of everlasting life.”

There are historic claims that the Fortingall Yew stands at the geographic centre of Scotland, but the Ordinance Survey sites the center as being located just east of Schiehallion,  “the fairy hill of the Caledonians”, which is only five miles north of Fortingall.  It’s interesting to note that the ancients were able to discern the geographic center within only a few miles.  A quick look at a ley line map shows that Fortingall is at the intersection of a few of them. With the knowledge of the land and its energies, it’s easy to see that the ancients would have seen Fortingall as the center.

“Every Celtic community, tribe and national federation of tribes had its sacred assembly place of law of justice. These were centrally placed at the mid-point of their territories….”

So it would make sense that Fortingall would have been a center for the Culture of the times. Perhaps it shared the honor with Schiehallion. Or, perhaps the yew was planted in its shadow on purpose; perhaps they wanted to get as close as they could without actually disturbing the Faerie People.

Near the Fortingall Yew are the remains of a Neolithic cairn, a standing stone, and the site of a medieval homestead: an old hill fort called Dun Geal, ‘the white fort’. During the time of Christ, Dun Geal was the residence of the Caledonian King, Metallanus.  There are references to Pontius Pilate having been born in Fortingall, and that he was related in some way to Metallanus. Using the oldest estimates, the yew was already 3000 years old at the time of Christ.

Yews are often long-lived and can start growing another trunk after they are about 500 years old. The circumference of the Fortingall Yew was over 56 feet when measured in 1769 by naturalist Thomas Pennant (1726 – 1798). The Fortingall Yew has decreased over the centuries from the center out and now it looks more like three or four trees.  We could see the posts in the ground that marked how large the tree had been a couple of hundred years ago.  The decrease in size is due to the natural decay of the ancient heartwood, causing the loss of the rings that would give its true age. The center area of the trunk was down to ground level in 1770. People had been removing limbs and parts of the trunk for souvenirs over the years, and there was some fire damage caused by locals setting a Bealltuinn,  “Beltane” fire at the base.  The tree is protected by a wall that was built in 1785, but it is easy to see in to the enclosed area.

Like the timeline path to Skara Brae on Orkney, the footpath through the churchyard to the Fortingall Yew has inscriptions that help set the past 5,000 years into perspective. The Fortingall Yew was a sapling when Stone Age ancestors built the burial cairn Càrn na Marbh*  “cairn of the dead” just to the west of it, and it was 1000 years old when the first Bronze Age settlers came to settle in the surrounding area.

Oftentimes, churches were built on the grounds of what was a previously sacred place to the ancients….to maintain spiritual continuity, I think, as the pagan rites of worship were supplanted by Christian ones.  The church at Fortingall stands on the grounds of a monastery that dates back to the 600’s when Christianity started taking hold in Scotland. Almost attached to the “garden” of the yew tree, the church was built in the late 1800’s by the local laird to replace the stone one that had been built in medieval times. That one itself was built to replace the wooden one that stood before it. Inside the church are relics from the 600’s – 1100, including Pictish carved stones; and the cemetery has graves with crosses dating back to the 700’s and others from medieval times.  It sits in a quiet place in a tiny village, and it was easy to not be distracted while there.

* Càrn na Marbh was used again as a burial cairn during the plague of 14th century.

Kate writes two blogs currently: "Weaving the Magic Thread ~ the texture of my life", a collection of auto-biographical essays; and "Scottish Heart", where she shares her love of Scotland and the trips through Scotland that she both plans and guides. She is also Copy Editor and Lead Contributor Emerita for "Celtic Family Magazine". Kate retired in 2013 from nearly 40 years in Private Practice as a Somatic Psychotherapist & Bodyworker, Massage Therapy Instructor, Sivananda Yoga Teacher, Spa Director, and Consultant, who also wrote & taught about Eco-sustainability and WellBalance. Her professional blog, "The Riley School of Integrated Somatic Bodywork" is also retired. All of Kate's blogs are copyright by Kate Cowie Riley; all photos are copyright Kate Cowie Riley, unless otherwise stated. All photos and text or part thereof are not to be used for commercial purposes or without written permission from the author. All photos must be used in their original form, no addition or alteration are allowed. Any advertisements that are seen on the Wordpress sites are in no way supported by Kate Riley.
View all posts by Kate Cowie Riley →
This entry was posted in Ancestry, Eco-travel, Ecology, Fortingall Yew, Land trust, Scotland, Scottish ancestry, Self drive Scotland tours, Travel, Uncategorized, Women Writers. Bookmark the permalink.

1 Response to The Fortingall Yew